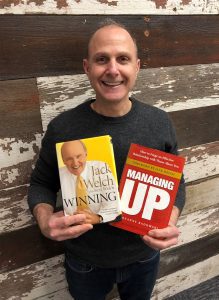 While serving as the president of the New York City Chapter of the Entrepreneurs’ Organization (EO), formerly the Young Entrepreneurs’ Organization or YEO, I picked up the phone and called Rosanne Badowski. For 14 years, Badowski served as Jack Welsh’s personal assistant, or shall I say personal manager. She did an incredible job of “Managing Up” and eventually wrote the book on it – under the same name.

I asked Rosanne if Jack would speak to a group of 300 business owners and CEOs from YEO and YPO (Young Presidents’ Organization) groups in NYC. After a few conversations, Welch agreed to do it at no cost, and we locked in a date. Jack was on a book tour for Winning, which had just been released, so we had just two months to plan this elaborate event. We bought books for all attendees, which made HarperCollins happy.

It was a pleasure working with Rosanne to coordinate all the details. She was very professional and cordial. She told me that Jack preferred interview style presentations, rather than standing at a podium and giving talks.

I soon had the amazing good fortune of interviewing him in front of this large, high-powered group for more than an hour.

To say I was nervous is an understatement. The tension escalated when just five minutes before the event Welsh hadn’t arrived. I couldn’t reach Rosanne or Jack via cell and decided to wait on the street in case his driver was having difficulty finding the entrance.

Inside, the anticipation of his arrival was palpable.

To my great relief, with literally one minute to spare, Jack, Rosanne, and his wife Suzy, the book’s co-author, arrived at this sold-out event.

When we got off the elevator at the penthouse event space, Jack put his hand on my arm, looked me in the eye, smiled, and said “Let’s get something to drink and unwind for a minute.” Despite his very hectic schedule and the event start time, he insisted we take the time to decompress. Jack always said what was on his mind and asked for what he wanted but thought of others around him and what they needed as well. He knew I needed to relax! Jack was intuitive, considerate, and responsive. All worthy leadership attributes.

Soon, we were sitting together in producer’s chairs under the bright lights for one of the most memorable 60 minutes of my life.

I had read his book twice before the interview, highlighted it, and had prepared plenty of questions. Afterwards, he sincerely thanked me, signed a few books, and chatted with a small group of entrepreneurs before disappearing into the night.

Some of my takeaways from Winning:

My regrets to his friends and family. Thanks Jack and thank you Rosanne for our exciting time together.

In his work life, Jack Welsh certainly walked the walk. All who worked for him report that he embodied these principles.

He will likely go down as the world’s greatest CEO.